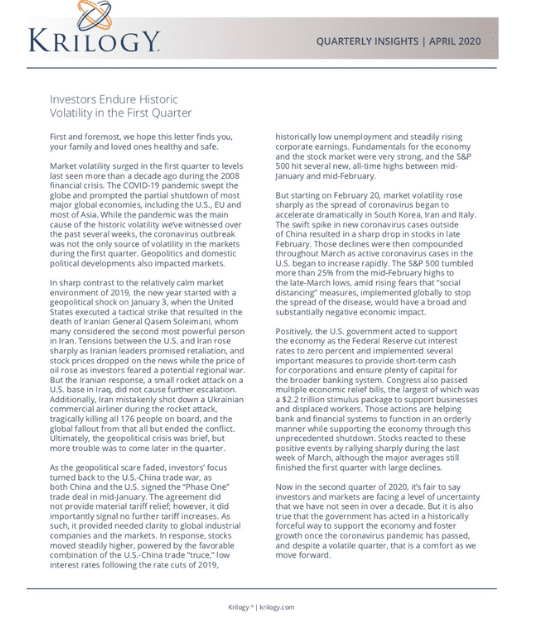 First and foremost, we hope this letter finds you, your family and loved ones healthy and safe.

Market volatility surged in the first quarter to levels last seen more than a decade ago during the 2008 financial crisis. The COVID-19 pandemic swept the globe and prompted the partial shutdown of most major global economies, including the U.S., EU and most of Asia. While the pandemic was the main cause of the historic volatility we’ve witnessed over the past several weeks, the coronavirus outbreak was not the only source of volatility in the markets during the first quarter. Geopolitics and domestic political developments also impacted markets.

In sharp contrast to the relatively calm market environment of 2019, the new year started with a geopolitical shock on January 3, when the United States executed a tactical strike that resulted in the death of Iranian General Qasem Soleimani, whom many considered the second most powerful person in Iran. Tensions between the U.S. and Iran rose sharply as Iranian leaders promised retaliation, and stock prices dropped on the news while the price of oil rose as investors feared a potential regional war. But the Iranian response, a small rocket attack on a U.S. base in Iraq, did not cause further escalation. Additionally, Iran mistakenly shot down a Ukrainian commercial airliner during the rocket attack, tragically killing all 176 people on board, and the global fallout from that all but ended the conflict. Ultimately, the geopolitical crisis was brief, but more trouble was to come later in the quarter.

As the geopolitical scare faded, investors’ focus turned back to the U.S.-China trade war, as both China and the U.S. signed the “Phase One” trade deal in mid-January. The agreement did not provide material tariff relief; however, it did importantly signal no further tariff increases. As such, it provided needed clarity to global industrial companies and the markets. In response, stocks moved steadily higher, powered by the favorable combination of the U.S.-China trade “truce,” low interest rates following the rate cuts of 2019, historically low unemployment and steadily rising corporate earnings. Fundamentals for the economy and the stock market were very strong, and the S&P 500 hit several new, all-time highs between mid-January and mid-February.

But starting on February 20, market volatility rose sharply as the spread of coronavirus began to accelerate dramatically in South Korea, Iran and Italy. The swift spike in new coronavirus cases outside of China resulted in a sharp drop in stocks in late February. Those declines were then compounded throughout March as active coronavirus cases in the U.S. began to increase rapidly. The S&P 500 tumbled more than 25% from the mid-February highs to the late-March lows, amid rising fears that “social distancing” measures, implemented globally to stop the spread of the disease, would have a broad and substantially negative economic impact.

Positively, the U.S. government acted to support the economy as the Federal Reserve cut interest rates to zero percent and implemented several important measures to provide short-term cash for corporations and ensure plenty of capital for the broader banking system. Congress also passed multiple economic relief bills, the largest of which was a $2.2 trillion stimulus package to support businesses and displaced workers. Those actions are helping bank and financial systems to function in an orderly manner while supporting the economy through this unprecedented shutdown. Stocks reacted to these positive events by rallying sharply during the last week of March, although the major averages still finished the first quarter with large declines.

Now in the second quarter of 2020, it’s fair to say investors and markets are facing a level of uncertainty that we have not seen in over a decade. But it is also true that the government has acted in a historically forceful way to support the economy and foster growth once the coronavirus pandemic has passed, and despite a volatile quarter, that is a comfort as we move forward.

The major U.S. stock indices all dropped sharply in the first quarter on concerns about economic fallout from the coronavirus pandemic. But the tech-heavy Nasdaq relatively outperformed the other three major indices, thanks to large-cap tech companies being viewed as somewhat insulated from the economic fallout in other industries. The S&P 500, Dow Jones Industrial Average and Russell 2000 (the small-cap index) all saw larger declines in the first quarter.

By market capitalization, large caps outperformed small caps in the first quarter, as we’d expect when market declines are being driven by concerns about future economic growth, because large caps are historically less sensitive to slowing growth than small cap stocks. From an investment-style standpoint, growth relatively outperformed value, yet again, due to strength in large-cap tech. 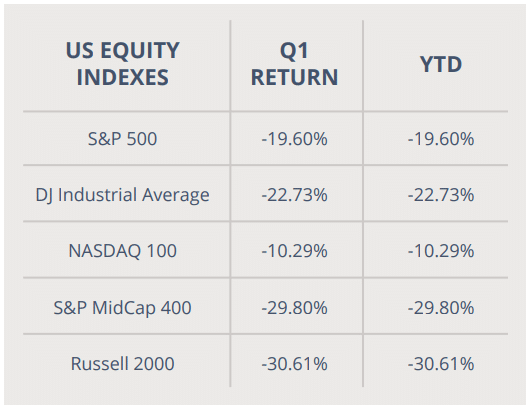 Foreign markets also declined in the first quarter and again underperformed the S&P 500. Foreign developed markets slightly outperformed emerging markets, although barely, as the economic fallout from the coronavirus is thought to be widespread globally. Emerging markets lagged behind both foreign developed markets and the S&P 500, although emerging markets did benefit from a rebound in Chinese markets in March, when China was successful in containing the coronavirus and their economy began to re-start late in the first quarter. 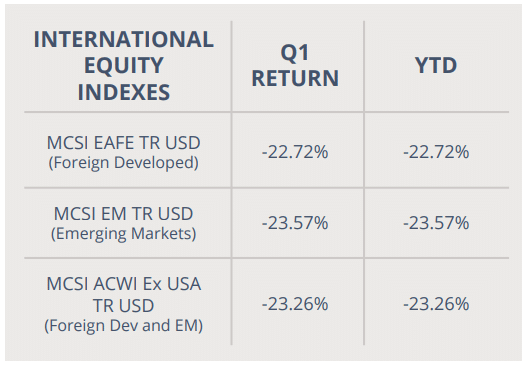 Commodities endured a historic collapse in the first quarter driven by steep declines in industrial commodities such as oil and copper. Oil prices plunged to multi-decade lows on a combination of reduced demand stemming from the global economic shutdown paired with surging supply due to the global price war that followed the failed “OPEC+” meeting in early March. Prices declined to levels not seen since the early 2000s in the final days of the quarter. Gold, meanwhile, rose slightly in the first quarter as investors sought protection from uncertainty, although gold was very volatile in March. 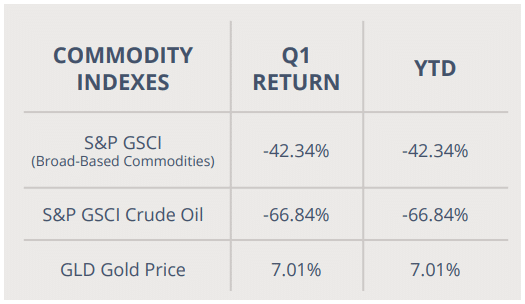 In fixed income markets, the total return for most bond classes was positive in the first quarter, though corporate bonds saw steep declines, which is not surprising given the potential economic fallout from the coronavirus pandemic. The leading benchmark for bonds, Bloomberg Barclays US Aggregate Bond Index, experienced positive returns for the sixth straight quarter. 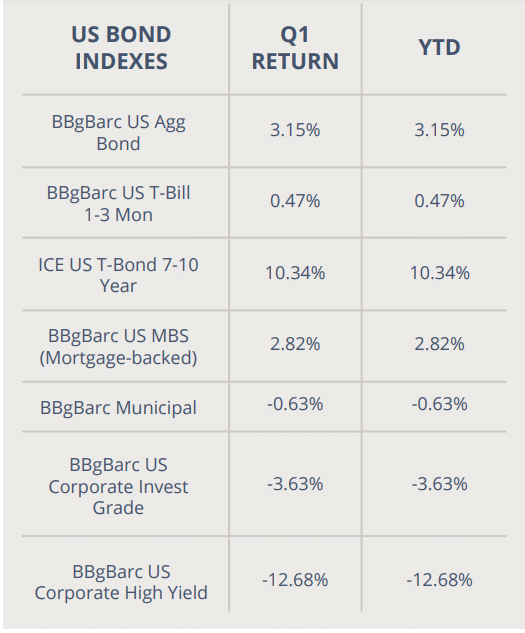 What a difference a quarter can make. At the beginning of 2020, market fundamentals were arguably as positive as they had been in years. Interest rates were low, the labor market was historically strong, the U.S. and China achieved a potentially lasting truce in the long-standing trade war, and the global economy was showing signs of acceleration following a sluggish 2019. But all that was upended by the coronavirus, which not only caused

historic and unsettling volatility across global financial markets, but also upended normal society in a way none of us had ever seen. Across the nation and the world, roads are mostly empty, office buildings are vacant, schools are closed, and normal life as we have known it has largely ground to a halt.

Yet it’s important to point out that, as Fed Chair Powell stated in a recent interview, nothing was “wrong” with our economy before the coronavirus hit. We had no tech stock bubble and no housing bubble, like we saw in the last two U.S. recessions. As mentioned, economic fundamentals were rather positive prior to this unprecedented shock, and that offers some comfort when we look at investing over a longer time horizon.

And remember that this unprecedented market volatility, along with all the societal disruption, is temporary. At some point, the spread of the virus will peak and begin to recede. Similarly, social distancing measures, while unsettling, also are only temporary. Our children will once again return to school and adults will return to work. The U.S. economy, by far the most flexible and resilient in the world, will recover, and that recovery will come sooner than previously thought, thanks to actions by the U.S. government over the past few weeks. Over the past month, we have all witnessed a degree of panic, both in regular society and in the financial markets. But as we all know, the worst thing to do during a panic is to panic. That’s because any panic leads to hasty, short-term decisions that jeopardize your long-term best interests.

Although no one could foresee this virus or the impact it would have on the markets and the economy, such events are why we have spent time with you designing a long-term, balanced financial plan. Through this difficult, but ultimately temporary disruption, that plan is designed to help you achieve your personal long-term financial goals. Meanwhile, shares of some of the most-profitable, well-run companies in the world are now trading at substantial discounts to levels at the beginning of the year, and history has shown us that over the longer term, tumultuous episodes can create fantastic investment opportunities, and some of the best buying conditions the market can offer.

Past performance is not indicative of future results, but history has shown that a long-term approach combined with a well-designed and well-executed investment strategy can overcome periods of heightened volatility, market corrections, and even bear markets.

At Krilogy, we understand the risks facing both the markets and the economy, and we are committed to helping you navigate effectively in this challenging environment. Successful investing is a marathon, not a sprint, and even intense volatility like we experienced in the first quarter is unlikely to alter a diversified approach set up to meet your long-term investment goals.

Therefore, it’s critical to stay invested, remain patient, and stick to the plan. We’ve worked with you to establish a personal allocation target based on your financial position, risk tolerance, and investment timeline. And we aim to take a diversified, disciplined approach with a clear focus on longer-term goals. We understand that volatile markets are both unnerving and stressful, and we thank you for your ongoing confidence and trust. Rest assured that our entire team will remain dedicated to helping you successfully navigate this difficult market environment.

Finally, above all else, please be careful and stay healthy. 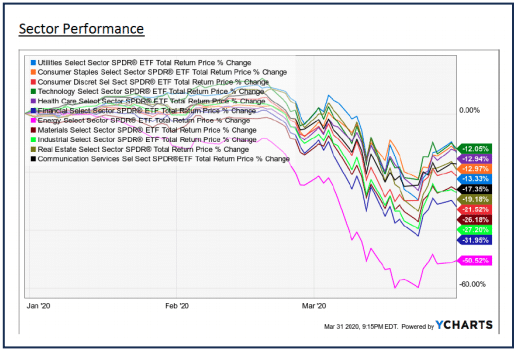 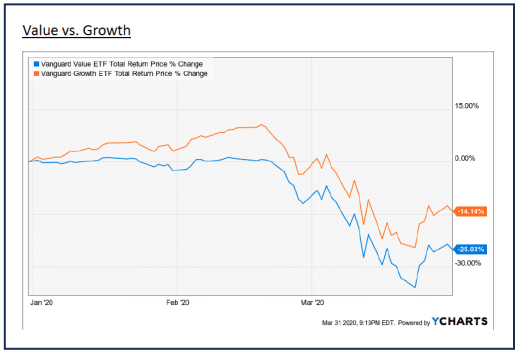 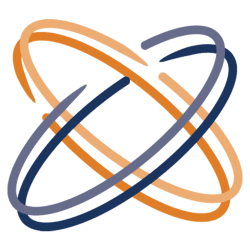